How to get their attention – even at that boring management meeting 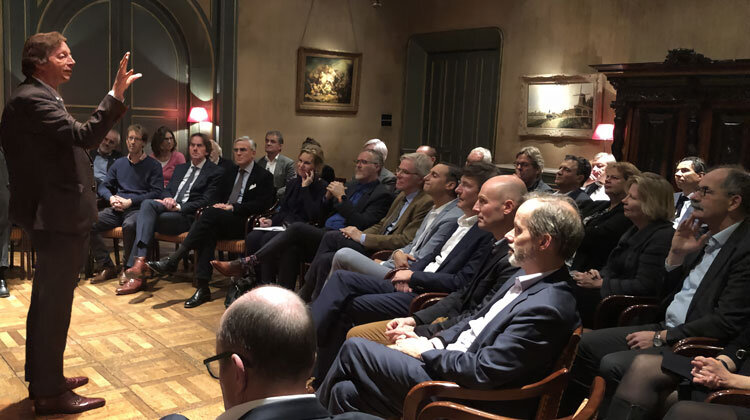 Firstly, there is your fear that they will think it’s strange. You are afraid they will stop you: ‘Just say what you want to say.’ Your second problem is even bigger: disinterest. You start your camping holiday in the Dordogne story and, one by one, they drop out.

Shouldn’t I tell stories then?

No, wait, that’s not what I meant. Look, a story is by far the best way to get your message across. You quickly become convinced of that when you have experienced it yourself. Your doubts about whether team members or managers might find it strange will disappear. What’s more, you’ll notice they even like it – they can relax because a story is easier to listen to than the normal bullets, figures and arguments. But… storytelling needs work to be effective. You have to do it the right way. And think about how you are going to tell the story so you get the Netflix effect.

The secret of a compelling story is: surprise. It is important to make your listener curious about what comes next within seconds. So give them a puzzle, a problem, a bizarre situation, a dilemma. Give them something that will make them join you into the story and look for a solution in their mind. People love problems, you know.
That’s exactly what Netflix does with their cliffhangers at the end of an episode: just one more, you say to yourself at 2 a.m. in the morning. Why? Because you want to know how the main character is going to get out of that awkward situation.

So I should use cliffhangers?

Yes and no. Netflix does that cliffhanger-thing mostly at the end of an episode. What I’m saying is that you should start with that right away. Preferably in the first sentence. Well, the 2nd or 3rd is acceptable too. In any case, as soon as possible. As blog trainer Kitty Kilian so eloquently put it to me:

This mechanism to capture someone’s attention applies not only to the written text, but also to the stories you tell.

Do you have an example of such storytelling?

Yes, I do. In training sessions I usually give a few examples of my own. But perhaps it would be more fun to show examples from course participants. Below you can see fragments of their stories – the first sentences with which they started their story. Take a look: does it make you curious?

“It is Monday, 4 September 2006. End of the morning. The grass is yellow from the sun, which has been shining on this Austrian mountainside every day for the past few months.
But I take in the view with clammy hands and throbbing armpits.”

First you hear when and where the story takes place. In the Austrian mountains, the end of summer is near. If he had continued with sentences like these, I would have lost interest. But that red sentence makes me curious. He is obviously afraid of something. Nervous. Apparently something is about to happen. What is it? And then I immediately want to hear the rest of the story.

“I want to tell you a story about an impossible task.
An assignment of which you say afterwards: why on earth did you accept it?”

This starts quite dangerous, I think, with the V-word. I wouldn’t do that in a business setting, read why here. But the strong second sentence probably removes the risk sufficiently. When I hear my manager or colleague tell me that he or she has accepted a difficult assignment, I want to listen. What kind of assignment was it, and especially: how did it end?

“On the first day of my new job at the Amsterdam University of Applied Sciences, the head of HR asked if I could go back to my previous job with the police.”

You have to admit, you want to know what was going on! Had they made a mistake about her? Had the budget suddenly run out? Had her new position been abolished just before her arrival?

“It may never have happened to you, but I have smashed up a car and it was not mine!”

To make the effect even stronger, I would delay the last words “and it wasn’t mine!”. A short pause of two beats beforehand.

Thank you, I get it

Wait a moment! Understanding is one thing. Doing it and developing experience is two.
Take a look at the online training Netflix-ise Your Presentations. It will give you more background, tips & tricks, sample stories and assignments to try out.